As an approach to software development, Scrum was set up to provide for adaptability. It is structured so that changes can be supported and implemented into a project that is currently in process.

Constants and Variables of the Scrum Framework

With the Agile or Scrum approach what is to be done in a given project is not held constant and changes can be added. The scope becomes variable but time and cost are considered constants. The overall project length is broken down into equal length time periods called sprints. In the framework of Scrum each sprint becomes a project in itself, and hopefully, at the end of the sprint (which is commonly thirty days long), there will be increments that are completed or “done” that can be turned over to the user for implementation.

Where the time factor becomes a constant of thirty days, the cost is also constant and would usually be the salaries of all the team members for the thirty days spent working on the just completed sprint.

Under the traditional waterfall approach to software development the “Iron Triangle” of scope, time, and the cost is different. The scope is constant, but time and cost are variable. By using the Scrum approach, there is only one variable (scope) rather than the two variables in the traditional approach.

The key components making up the framework of Scrum can be broken down into the three main areas of personnel, meetings, and input-output reports. 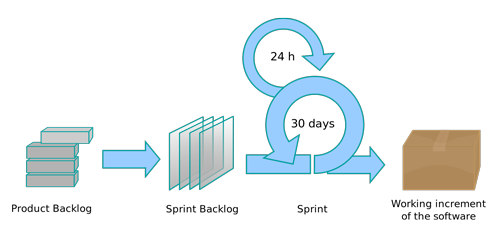 Agile Methodology that Works Best for Your Organization's Needs

While Scrum framework, one of the popular Agile frameworks, has been adapted by many organizations, there are other Agile methodologies that have been proven to be the right choice for other companies.

Our comprehensive Agile knowledge library will guide you through various Agile frameworks and Agile Project Management practices to choose the right process that will adapt to your organization's needs.

For best results, contact our experienced Agile professionals that will walk you through the Readiness Assessment process to ensure the proper implementation of Agile in your organization.

Shave Years off of the Trial and Error Implementing Agile